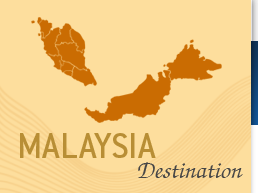 Malaysia has opened its doors and what lies beyond are perfect beaches, captivating scenery and friendly people. Colonial history is alive in many of the towns and cities and Malaysia has countless temples and churches reflecting Malaysia’s rich cultural heritage, quiet tea plantations blanket the cool highlands and stunning national parks with abundant birds and wildlife.

Malaya was inhabited by Stone Age hunter-gathers arriving around 8,000 years ago eventually giving way to farmers who used slash and burn farming. At around 1000 BCE farmers started to use bronze and iron settling along the coast and rivers and living by means of fishing and growing crops.

Malaya consisted of states in the 2nd & 3rd centuries and they Malayans traded with India and were heavily influenced by them. During the next few centuries different states controlled Malaya. Eventually Melaka became the dominant state and traded with Arab, Chinese and Indian ships sailing there. The Portuguese noticed this and in the early 16th century sent an expedition to capture the state and soon fell. The son of the Sultan of Melaka then founded the state of Johor making an alliance with the Dutch and after a couple of unsuccessful attempts Melaka finally fell to the Dutch. During the 17th century the Dutch drove out the other Europeans and remain friends with Johor.

In the early 17th century the Dutch drove out all other Europeans from the area. For the rest of the 17th century they were friends with Johor and the two powers dominated the region. This lasted for a few decades before the Bugis people from Sulawesi took over power.

This all changed again with the arrival of the British, they began looking for a base in Malaya and in 1786 they occupied Penang and founded Georgetown. Colonialism continued and by 1824 the British and the Dutch signed a treaty effectively divided Malaya between them. Mainland Malaya grew rapidly with an influx of Chinese and Indian workers.

By 1867 the British controlled much of Mainland Malaya and it was made a crown colony. The British also stopped charging duty on tin and as a result exports to the UK boomed and so did the economy.

The British continued to expand their influence on Malaya and at the beginning of the 20th century the northern states came under British control and were formally absorbed into British Malaya. Rubber then began to be developed and the economy grew further.

With the 2nd world war the Japanese overran the Malay Peninsula and the British withdrew to Singapore before surrendering. With the defeat of the Japanese the Federation of Malaya was formed and eventually became independent in 1957. Economic policy developed and in the 70s, 80s and 90s Malaysia went from being a poor agricultural country to a rich industrial one it is now a developed and prosperous country with a population of around 30 million.

Malaysians are influenced by many cultures and religions and the Malay are the largest ethnic group with over half the population and follow Islam. The Chinese population is also large as many of the Chinese traders settled in Malaysia during the 19th century with most Chinese following Tao Buddhism with strong ties to their homeland. They account for 35 percent of the population. The large remainder of the population are Indians who visited for around 2,000 with some finally settling in the 19th century and follow Hinduism. The remaining population is made up of the indigenous tribals with the majority present in Sarawak and Sabah.

Thaipusam: February
Thaipusam is a Hindu festival celebrated by the Tamil community. It commemorates both the birthday of Lord Murugan and the occasion when Parvati gave Lord Murugan a lance so that the former could vanquish the demon Soorapadman. In Malaysia, this festival takes place in several locations but most notably in Batu Caves (near to Kuala Lumpur). Every year, millions of devotees and thousands of tourists will gather in this place to witness the celebration which includes the famous 8 hours procession.

Expect to see a very grand procession which involves hundreds and thousands of people which starts from the heart of Kuala Lumpur and going up the 272 steps to the top of Batu Caves.

Waisak Day: May
A celebration observed by Buddhists in many countries including Malaysia. It is sometimes called “Buddha’s birthday”. On the day itself, devotees are encouraged to assemble in their respective temples. Activities such as the hoisting of the Buddhist flag, offerings of flowers, candles and joss-sticks, etc will be carried out. Devotees are also encouraged to make a special effort not to take any life and to take vegetarian food during this day.
Expect to see colorful processions and decorations, and plenty of devotees in temples.

Deepavali: October Time
Deepavali or Diwali is a major Hindu festival. It is also known as the “Festivals of Lights” where people light up small lamps in order to signify victory over the evil within an individual. On the Hindu calendar, this festival falls on the new moon day which ends the month of Asvina and begins the month of Kartika. The celebration is said to last for 5 days.
During this festival, you can expect to see a lot of lights, flowers, fireworks, sweets and worships.

Gawai Dayak: June
This Dayak Festival is celebrated by the Dayak (collective name of the native ethnic groups of Sarawak such as Iban, Kayan, Bidayuh, Kelabit, etc) people of Sarawak state on the 1st day of June every year. It is a time for friends and family members to visit each other. The entire festival lasts for several days.

Expect to see a lot of food such as the famous glutinous rice (steamed in bamboo), rice wine (tuak), cock fighting and blowpipe competitions.

Moon Cake Festival October
Also known as Mooncake festival and Lantern festival (Zhongqiu Jie), this is a very popular festival among the Chinese people (second to Chinese New Year). It is held in the 15th day of the 8th Lunar month. The famous food during this festival is none other than the mooncakes. Family members will gather around during this day to enjoy the mooncake, tea, pameloes and the bright mid-autumn moon as well as lighting colourful lanterns.

Most nationalities do not require a Visa for entering Malaysia, if you are a UK national you automatically obtain a 90 Day Visa on arrival.

The healthcare in Malaysia is excellent and General Practitioners, dentists and opticians are ready available, offering a private service at affordable prices, although it is recommended that you have travel insurance as any major incident be very costly. Doctors and staff at clinics and larger hospitals generally speak good English. Both Hospitals and Clinics offer a walk in service. Bottled water is provided in most hotels, and can also be bought easily and inexpensively at most shops. Imported water such as Evian, Perrier, Volvic etc is also available, but quite expensive. Ice cubes served in drinks at established restaurants are not a problem as they are usually prepared from boiled or bottled water.
Please consult your doctor about the inoculations and anti-malaria precautions required for Thailand. In general cover against polio, rabies, cholera, typhoid, tetanus, malaria, hepatitis A and meningitis is recommended (though not mandatory).

The Malaysian currency is the Ringgit (RM), local sometime refer to Ringgit as a dollar. There are numerous banks and ATMs over Malaysia and money can be exchanged or withdrawn very easily. Most shops, restaurants and hotels also take credit cards.

Electricity in Malaysia is 220 volts; this means for those arriving from the UK you will not need a Voltage adapter. You will probably need an adapter as most plugs in Malaysia have 2 prongs.

Tipping is generally not expected in Malaysia. In some upper class restaurants or accommodations they will directly charge you with a 10% service charge, you should clearly see that on the bill. Feel free to leave a tip for good service of between 5-10 %, it is of course up to you and dependant on the service received.

Always have spare passport photos while this may not be needed for Malaysia it will certainly be needed for other neighbouring Southeast Asian countries you may be visiting.